As far as men are concern, there are only two shades of grey that we bother about.

Women have recently been fascinated by this book called “Fifty shades of grey”, and till date I have yet to hear about a man reading the book. So we thought we would do you a favour by providing our own interpretation of Fifty shades of grey.

The Fifty shades of grey book was coincidentally what this GTR owner’s wife was reading while we were doing our thing and taking photos of the car, which spawned inspiration for the title. In case you haven’t heard about the book, Fifty shades of grey is pretty much a porn-like book, with the contents largely based about sex and specifically emotions, something women seem to enjoy reading about.

The thing is though, men don’t generally enjoy such deep lovey-dovey romance stuff. That being said, there are only two other types of grey we will ever bother taking a second look at. Since Sasha grey seems a little too far out of reach, then we shall focus our attention onto the next best thing. The 50 shades of grey GTR.

The end result is a R35 GTR covered in 50 shades of grey, because almost the whole car is covered in carbon fiber!

As with every photo shoot we ran into our fair share of problems. When this feature was being taken, the F1 had just concluded and that meant many of the places we had in mind were blocked off and barricaded. That forced us to shift to a near by location, Shenton way where we stopped road side. I had no idea that some of the buildings in Shenton way actually owned the roads around it, or at least that was what the security guard used to chase us away. Even being parked by the road side to snap a few photos is apparently causing nuisance, go figure.

Thankfully the owner was very accommodating to our problems and didn’t mind our travelling around Singapore just to find a location that we can use for photo taking.

Since we were already on the go, we took the opportunity to take a couple of rolling shots.

On the exterior the GTR wears a GT500 style dry carbon fiber bonnet, some how giving the car the looks to match its name “The Godzilla”.

The front aerodynamics come in the form of a AMUSE front lip and Mines canards still on the stock GTR bumper. This car however is still undergoing work in various places and the next time we post a photo of this car on TheRightWrong, you can be sure that the entire car will be carbon fiber clad. The owner is getting a carbon fiber front bumper made and has yet to be completed. 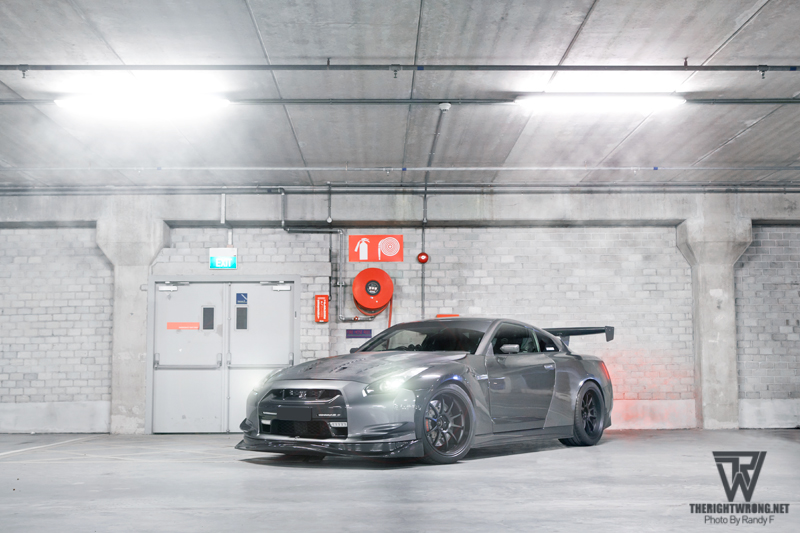 The things already carbon clad are… 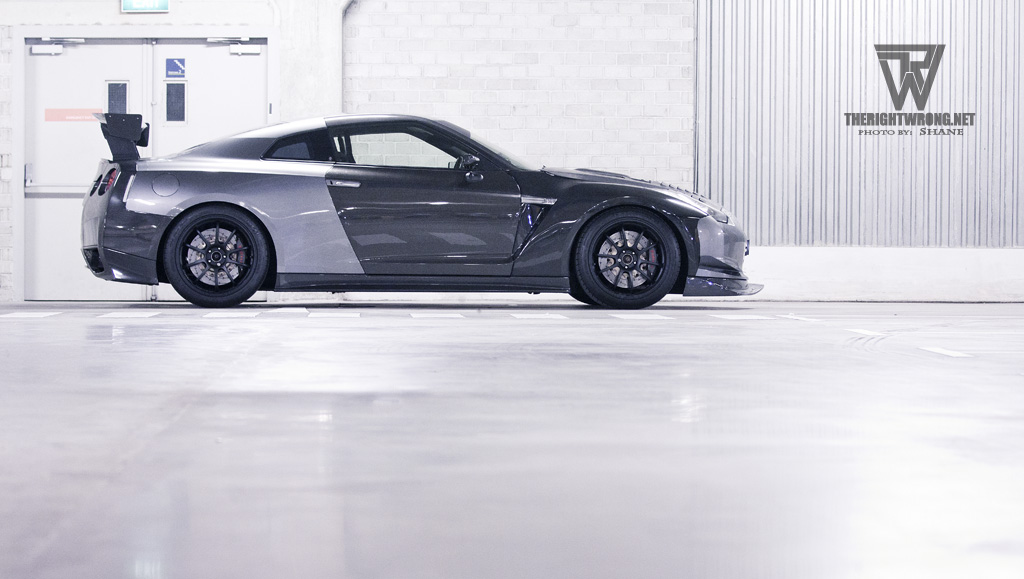 AHB carbon A pillars and CraftSquare side mirrors

On a Carbon fiber boot and bootlid

The end result is a GTR that looks even more sinister then Godzilla itself.

More carbon fiber on the inside

With the help of a strengthened block with darton sleeves, Tomei cams, Boost logic GT30 turbo kit with waste gate and some other hush hush stuff, this GTR is good for a dyno proven 1000 horsepower.

Boost Logic Exhaust tips look like the back of a Jet Fighter.

At this point of time in Singapore, LTA are looking to review the modification guidelines to include harsher penalties. What is a car like this still doing on the road, being used beyond operational intention and endangering lives you might ask?

As I have once mentioned, there are a number of owners such as this particular one, that can be considered to be in that portion of the lucky few who can afford multiple cars to drive daily. This GTR is just 1 of the cars in his fleet of cars, with a Lamborghini Gallardo among many others also part of that fleet. I doubt the owner would endanger any lives if the car does not even get to see the roads, spending most of its time as a display piece in the garage with exception of heading up north to the track to unleash those 1000 horses.

If you found the car familiar at the start of this post, it’s probably because you’ve seen pictures of it on the ZeroToHundred time attack where it took first place in the GTR category. The GTR was built to be a supercar, it was meant to be pushed on the track which is why Nissan itself set the car to be delimited only on the track. I’d say the owner is utilizing this car well within operational intention, seeing that Nissan designed the car to be a monstrous track beast straight from the box.

We didn’t get much photos of the interior because it is yet another work in progress, as you probably can guess from the rest of the car what will be happening to it in the near future. Notable items in the interior however are these Tecnocraft full carbon fiber seats, more commonly used in Lamborghinis. They don’t even offer any padding as seats like Bride and Recaro does, all in the name of saving weight.

2 – hover the mouse on the “Like” button near the gear symbol and In the pop-up select “ADD TO THE INTEREST LISTS”. Due to the changes in Facebook only 10% of the readers get to see everything we post unless we pay to “Promote Post”. Some stupid function Facebook decided to implement on all Facebook pages to earn some pocket change.